Members share their talents and services, record their hours, then ‘spend’ them later on services they want.
Everyone’s hours are equal.
There is no barter.

Among the most critical parts of a healthy community economy are its non-monetary components, such as household labor and civic activity.   A CORE ECONOMY.

If our Core Economies are strong then we will not be divided communities.  Currently, there is a strong political atmosphere of division, or attempting to divide our communities into opposition camps.  Don’t fall for that, work with your neighbor who is different from you, take care of that person’s yard (who had the opposite political sign) and they can do your windows.  Get to know each other, build connections, not divisions. 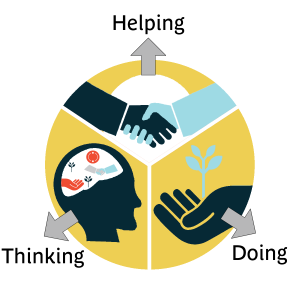 PARTIAL LISTING OF TIME BANKS – Join one if you have any services that others might need, you will be glad you did!

We are all very familiar with what the economy is. Or at least we think we are. It’s where we earn and spend the money we use to get essential things like food and shelter. The economy is so familiar to us that, like fish in water, we hardly even see it for what it is.

What we don’t always recognize is that the money economy we have created is just one part of the way we organize our affairs. There is another, invisible economy that we take part in every day of our lives. It is the economy of home, family, neighborhood and community. We don’t think of it as an economic system—but it is. It is so important that it deserves the name that economist Neva Goodwin gave it when she called it the “Core” economy.

Most importantly, many of our social problems can be traced back to the fact that the Core Economy has been damaged by the money economy.