TO BEGIN THE JOURNEY by George Wright

TO BEGIN THE JOURNEY by George Wright

This is for those of you who might want to further your interest in Technocracy.  First, the name Technocracy has been used for example, as a synonym to advertise as a game, and other insignificant oddities.  More devastating, is the attempt to discredit Technocracy the concept.

Technocracy the concept, is a design that removes the controls of an antiquated social structure which was conceived generations long ago, for a way of life that existed long ago.   At the outset, Technocracy is not a panacea.  As human beings we can be quite crude and rude, but what Technocracy can do is remove so many of the outer stimuli (money, power, etc.) that tempts us to behave as we sometimes do.

Technocracy the concept, is based on the reality that increased use of advanced technology, drastic changes taking place economically and socially, are forcing society to adapt to these changes.  When we try to ignore that need, it places us in jeopardy of a chaotic future of disruption in all aspects of life.

One of the most significant aspects that Technocracy embraces answers a precept in our own Constitution and that is to “strive to make a more perfect union.”  The design of a functional economic and social structure guided by science goes well into that.  We now have the ability to accommodate the needs of all our citizens, white, black, tan, male, female and all in between, and I mean All, and supply them with shelter, food, medical, transportation, education, and recreation, basically well beyond our basic needs, is a gigantic step and one that our present system of governance cannot provide.

This message is not presented as if we have a choice, we do not.  The absolute need in the current system for scarcity and continual expansion is a dead-end system.  One cannot continually expand without ‘exploding’. 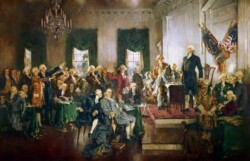 Howard Chandler’s Signing of the Constitution

The federal government has had to increase our monetary debt to feed the system’s requirement for that scarcity and expansion since the beginning of the increased use of technology.  As I write this, the amount of that debt is over $28 Trillion! Is there no limit?  I think we know the answer to that question.

As if that is not enough of a concern, we have a planet under great stress from our outright negligence and wasteful economic practices.  Polar ice caps melting, temperatures climbing as never before, storms creating such severity causing loss of life and property as never before, and more and more species becoming extinct.

We do not have much time now and maybe we are out of it, time to begin the transformation from an uncaring system to that of incorporating a design using science and technology for the benefit of people instead of profit for a few; that system is, in reality, the only way forward.