From several sources, we are told that that Howard Scott preferred linear cities for efficiency.  In recent news it was announced that SkyWay City in Abu Dhabi is being constructed on a linear city model.  This will be pioneering endeavor and hopefully prove fruitful. 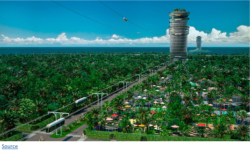 I personally still prefer Paolo Soleri Lean Linear City design for its modularity and scalability.  If you are interested you can pick up Paolo Soleri’s book on this concept or if you are in Arizona visit Arcosanti

Paolo Soleri’s legacy city project and repository of his Architectural ideas and concepts.

Here are some links to virtual tour presentations of Soleri’s Linear Cities.

Hopefully, you can see some of the merit to the linear city idea in what I have presented outside the box of grid and circle cities.