A tiny, black rectangular device could be the world’s long-term solution for clean water. The gadget is solar-powered, half the size of a postage stamp, and it disinfects water.
“Our device looks like a little rectangle of black glass,” said Chong Liu, lead author of a paper on the device published in Nature Nanotechnology. “We just dropped it into the water and put everything under the sun, and the sun did all the work,” she said.

The purifier, developed by researchers at the SLAC National Accelerator and Stanford University, contains microscopic layers of “nanoflakes.” When exposed to water and sunlight, they produce hydrogen peroxide, a natural disinfectant. In early testing, the disinfectant killed 99.999% of bacteria before dissipating and leaving behind safe-to-drink water.

“When you see there’s no bacteria growing, it’s really exciting,” said Liu in the report published on Monday. “We didn’t expect it to work that well at first.”
The new device is a substantial improvement over previous solar-powered water cleaning systems. The nanoflakes, which contain industrial lubricant molybdenum disulfide, absorb more than just UV light. Absorbing a wider band of the light spectrum means the nanoflakes utilize 50% of the incoming sunlight’s energy, whereas standard purifiers harness 4%. 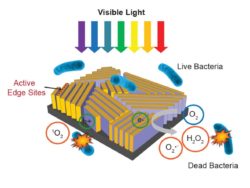 The solar-powered reaction should leave the device completely reusable.

Researchers tested the tiny tablet in 25-milliliter vessels containing E. Coli and lactic acid bacteria Enterococcus. It took less than 20 minutes for the water in the container to be cleaned. Larger water tanks can be purified by scaling up the number of tablets used.

For the moment, the still-unnamed device’s ability to clean chemical pollutants like lead is unknown.

Despite the potential limitations the small rectangle of nanoflakes is a major step forward to providing everyone in water-contaminated areas with a clean source of refreshment.
“As a researcher it’s really exciting for us to see that by developing technologies you have the potential to help a lot of people,” Liu said.
The device will next be tested in real world settings before, researchers hope, being put into commercial production at a price less than $30.