Burning Fossil Fuels – What does it do to our environment?

Home/Economy, Energy, Energy Distribution, Environment, Society, Technocracy-Blog, Technology/Burning Fossil Fuels – What does it do to our environment?
Previous Next

Burning Fossil Fuels – What does it do to our environment?

Below is a map of the United States via airvisual.com –  the parts that are red are high pollution – Louisville, Kentucky is the hotspot. 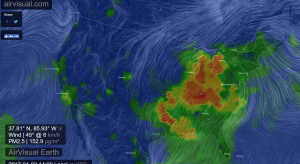 Some of the most significant hidden costs of fossil fuels are from the air emissions that occur when they are burned. Unlike the extraction and transport stages, in which coal, oil, and natural gas can have very different types of impacts, all fossil fuels emit carbon dioxide and other harmful air pollutants when burned. These emissions lead to a wide variety of public health and environmental costs that are borne at the local, regional, national, and global levels.

Burning fossil fuels emits a number of air pollutants that are harmful to both the environment and public health.

Sulfur dioxide (SO2) emissions, primarily the result of burning coal, contribute to acid rain and the formation of harmful particulate matter. In addition, SO2 emissions can exacerbate respiratory ailments, including asthma, nasal congestion, and pulmonary inflammation [37]. In 2014, fossil fuel combustion at power plants accounted for 64 percent of US SO2 emissions [38].

Nitrogen oxides (NOx) emissions, a byproduct of all fossil fuel combustion, contribute to acid rain and ground-level ozone (smog), which can burn lung tissue and can make people more susceptible to asthma, bronchitis, and other chronic respiratory diseases. Fossil fuel-powered transportation is the primary contributor to US NOx emissions [39].

Acid rain is formed when sulfur dioxide and nitrogen oxides mix with water, oxygen, and other chemicals in the atmosphere, leading to rain and other precipitation that is mildly acidic. Acidic precipitation increases the acidity of lakes and streams, which can be harmful to fish and other aquatic organisms. It can also damage trees and weaken forest ecosystems [40].

Particulate matter (soot) emissions produce haze and can cause chronic bronchitis, aggravated asthma, and elevated occurrence of premature death. In 2010, it is estimated that fine particle pollution from US coal plants resulted in 13,200 deaths, 9,700 hospitalizations, and 20,000 heart attacks. The impacts are particularly severe among the young, the elderly, and those who suffer from respiratory disease. The total health cost was estimated to be more than $100 billion per year [41].

Coal-fired power plants are the largest source of mercury emissions to the air in the United States [42, 43]. As airborne mercury settles onto the ground, it washes into bodies of water where it accumulates in fish, and subsequently passes through the food chain to birds and other animals. The consumption of mercury-laden fish by pregnant women has been associated with neurological and neurobehavioral effects in infants. Young children are also at risk [44].

A number of studies have sought to quantify the health costs associated with fossil fuel-related air pollution. The National Academy of Sciences assessed the costs of SO2, NOx, and particulate matter air pollution from coal and reported an annual cost of $62 billion for 2005 —approximately 3.2 cents per kilowatt-hour (kWh) [45]. A separate study estimated that the pollution costs from coal combustion, including the effects of volatile organic compounds (VOCs) and ozone, was approximately $187 billion annually, or 9.3 cents per kWh [46].

A 2013 study also assessed the economic impacts of fossil fuel use, including illnesses, premature mortality, workdays lost, and direct costs to the healthcare system associated with emissions of particulates, NOx, and SO2. This study found an average economic cost (or “public health added cost”) of 32 cents per kWh for coal, 13 cents per kWh for oil, and 2 cents per kWh for natural gas [47]. While cost estimates vary depending on each study’s scope and assumptions, together they demonstrate the significant and real economic costs that unpriced air emissions impose on society.

Fossil fuel transportation emissions represent the largest single source of toxic air pollution in the U.S., accounting for over a third of carbon monoxide (CO) and NOx emissions.