A Culture of Fear

A Culture of Fear

TECHNOCRACY has long described the problems with the price system. The marketing of fear to sell ideas and tangible items. For those who want(ed) control, fear of OTHERS made a great selling point. “Let us, the big, smart people, take care of you and we will bring security to you by bringing in control of your education, your labor, your ideas.” 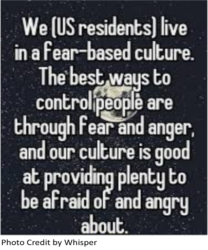 Now, there are those who say Technocracy’s main focus is to have Scientists control everything.

That was a misrepresentation of Technocracy’s focus by the very people who want to have a class system where some are perceived as better than others.

Technocracy is all about scientific methods, efficiency, effectiveness. In a Technocracy, anyone with the skills, education, information, experience can be a scientist and effect solutions that will work for society and the environment. How can a farmer in Alaska tell a Georgia farmer what is best to plant and when? (S)he can’t. The Alaska farmer is a scientist in a specialized area – Alaska farming; not Georgia farming. A Technocracy would want the Alaska farmer to effect changes in the area that they know best.

Let the science determine what is the best decision, not the best speaker, the most charismatic, but the most efficient and effective solution for society and the environment
The fear control (not control of fear but control through fear) plays on people’s natural hesitancy in accepting their own knowledge and abilities. It gives people an enemy; a country, a group of people, an area, or thoughts, lifestyles, religion. That enemy is the focus to get people into a fear mode where they stop thinking, stop researching and depending on their own knowledge and understanding. They start listening to the fear-mongers and react to an imagined threat. It is a very powerful control method.

The article below was written well before the current social climate where fear has been made ‘normal’ and internal divisiveness has become the new game for the controllers. Technocracy has edited the article. you will find a link to the original article at the end.

Upon the collapse of the Soviet Union, Soviet foreign spokesman Gennadi Gerasimov warned the United States, “We have done the most terrible thing to you that we could possibly have done. We have deprived you of an enemy.”

The United States has a long history of exploiting fear for the purpose of legitimizing its growth.

In the Great Depression, the government used the fear of capitalism to legitimize previously unforeseen growth in the size of the federal bureaucracy. As the Depression wore on, the state’s inability to spend its way into prosperity led to public skepticism. The government quickly shifted its focus to the threat posed by Japan, Germany, and their allies.

Indeed, the past decade witnessed the development of an overwhelming American fear of terrorism. Americans have apathetically allowed the repression of their freedoms in the name of some greater cause (a cause, ironically, justified as a mission to preserve American freedoms).

While support of American imperialism, otherwise termed “counterterrorism,” has recently waned, the government is now reinforcing its legitimacy by once again intervening on behalf of the common man against the capitalist system. By this means the bureaucracy continues to grow unhampered, and individual freedom has decreased.

Our government’s authority is based on the notion that only the state can protect the
American people from the vices of greed and opposing ideologies. The state thrives off the creation of a false dichotomy between stateless ruin and state-induced prosperity.

The Great Depression witnessed one of the earliest large-scale increases in federal power in 20th-century American history. The fear of economic collapse, poverty, and misery led the American people to largely ignore, or even allow and accept, the growth of bureaucracy. 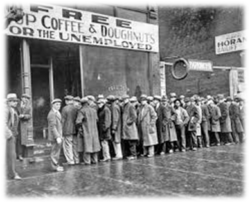 Failing to stimulate the United States out of the depression, the American government desperately needed a new enemy to distract the country’s attention with. The rise of Adolf Hitler in Europe and the growing threat of Japanese imperialism in the Pacific provided Roosevelt with the perfect target. Intervention in Europe was justified not merely on account of helping the British or opposing German fascism. The government instead built a culture of fear. 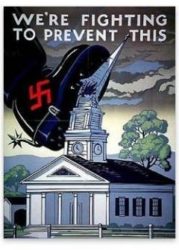 Another such poster depicted the Germans and Japanese looming ominously over the United States, one with a pistol and the other with a bloody dagger, reading, “Our homes are in danger now!”

Creating a threat was necessary for control. To this end, the administration managed not only to run a large propaganda campaign, but to coax the Japanese into a clear provocation.

The result was a two-theater war, costing the United States nearly 300,000 lives (and many more wounded), and leaving Europe and Japan almost completely shattered. All the while, the American state continued to grow in size, power, and capability.

Anticommunism and the Cold War

After the end of the Second World War, the Soviet Union replaced the defeated Axis Powers as the greatest threat to the United States’ freedom. The perceived Soviet threat provided the rationalization for the Cold War, which ensued between 1946 and 1991. In the period between 1946 and 1991 Americans saw quite possibly the greatest expansion of bureaucracy in the US government — ironic for a country purportedly focused on fighting communism.

Fear of communism validated American involvement in two major wars: Korea and Vietnam. Justified or not, both wars held great implications regarding the growth of the state.

Fear of inevitable war, and the exploitation of such fear by the state, led to the creation of a sprawling military-industrial complex. Given the public-private nature of this particular market, it is unsurprising that it devolved into a system in which companies would directly lobby government for contracts, and where the company with the most friends in government usually won. The establishment of a network of favoritism led directly to a situation in which politicians readily justified different military programs just to necessitate the continued production of war supplies.

The government consistently exploited the fear of communism to meet the needs of bureaucrats. Senator Joseph McCarthy used the fear of communism to discredit his political opponents and protect himself from criticism. He had hundreds of individuals, most related to the entertainment industry, blacklisted. [We currently are seeing this form of control and attack on non-christian, non-white, non-heterosexual people].

The roots of the United States’ second major anticommunist war, the Vietnam War, were firmly planted in the mid-1950s, with the dissolution of French Indochina into two independent Vietnams. While the North fell under communist rule, the South, firmly anticommunist, was promptly buttressed by the fiscal and military support of the Eisenhower administration.

While the Vietnam War proved to be an absolute disaster, it managed to finally solidify the bureaucracy’s ability to wage war without a congressional declaration. This made future war efforts much easier to organize, leading to a number of military operations during the 1980s.

In retrospect, especially for those who have no recollection of the era, it is rather difficult to understand the culture of fear imposed by the state. No world war materialized. Communism fell not by the sword, but by its own internal inconsistencies.

The losers were the citizens of the “free world,” who, by turning a blind eye to rampant government growth were enslaved by their own “protectors.” Soviet foreign spokesman Gerasimov warned the American government of the great harm the Soviets had inflicted by collapsing. Government-sponsored slavery suddenly lost its principal justification.

The nation was swept with terror frenzy. Like communism before it, the elusive threat of terrorism justified two wars and numerous infringements on the individual rights of American citizens.

Support for continued interventionism abroad continues to wane, as it becomes clear that wars not fought directly for America has little to do with global terrorism or the protection of American freedoms. The state has once again shifted policy to cope with the change in public opinion.

The fear of terrorism has by and large been replaced by the alleged threat of animal spirits. The threat once again becomes greed, and the state says there is only one solution — embrace the state.

The masses have once again fallen for this appeal to fear. Without government intervention, alleges the regime [aka, our government], the country will fall into a spiral of poverty and misfortune. The people, otherwise free, will find themselves the downtrodden slaves of the free market.

The government thrives on creating these false dichotomies: war or invasion, militant anticommunism or a global communist revolution, war or terrorism, economic interventionism or economic misery. It offers the masses two choices, utopia or hell. The one, it claims, can only be provided by the state, while the other is the product of an unprotected and anarchic society. These illogical fears have tended to win over reason, and the government continues to grow unchecked. 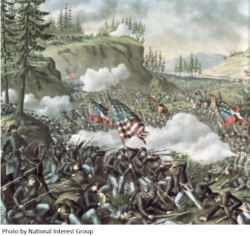 A century of war, corruption, interventionism, and inflation have failed to dissuade the public from apathetically accepting government growth. This phenomenon can perhaps be explained by noting the collective rejection of reason and logic, spread through the system by the ranks of intellectuals and academics who willingly accept this transition to irrationalism. For whatever reason, bureaucratic expansion has been left virtually unopposed.

The recent dismantling, by means of the Internet, of the state’s monopoly on education has allowed for the formation of resistance. These represent a return of reason. [Now you see why the government wants to control the internet]

Before such a movement can set in
the culture of fear must be dispelled.

Man must not allow himself to fall prey to the state’s exploitation of his emotions.

Man must recognize the availability of other options. 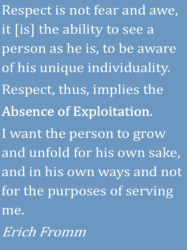