I AM THE PRICE SYSTEM  By R. B.  Langan Editor, Great Lakes Technocrat

Everybody knows the Price System.  We all have dealings with it every day of our lives, from birth to death, and there is no escaping it this side of the River Styx.  It dictates nearly everything we do and controls almost everything we use except the air we breathe.  The only reason it can’t interfere there is because air is abundant.
Here is its autobiography, written by the old miser itself.

Always With You
I have existed since the beginning of social life yet few men recognize my fundamental characteristics.  With the exception of some minor civilizations here and there, I am the only type of Social System that has ever existed.  I was conceived in Human Toil and Scarcity and dedicated to Profit and Waste.  Before recorded history began I laid down the foundation of my system in the early tribal life of mankind.  In the Ancient World they called me Chattel Slavery.  The glory of Greece and the power of Rome was rooted firmly in Human Toil and Scarcity.   During that long night of the human mind called the Dark Ages I was known as Feudalism and Serfdom. 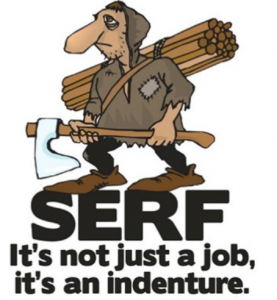 In the modern world I am called Capitalism and they even entitle me Democracy in certain nations.  Of all the names I have borne, the most misleading of all is that given to me in Russia.  There they call me Communism.  My name has been changed many times but essentially I have remained the same in all countries and times, except that my techniques have improved.

I am any social system whatsoever that effects its distribution of goods and services by means; of any system of trade or commerce based on commodity valuation and employing any form of debt tokens or money.

For uncounted generations I have held sway in every Nation over the bodies and minds of men.  Today I still exist all over the world in various stages of development, controlling the production and exchange of goods and services and all the means whereby men live.

I am the group expression of man’s common urge to live and prosper at the expense of his environment, even including the human components thereof.  I am the resulting social system under whose regimentation every man is forced to give as little to society and his fellow man as he can get away with and take back as much as he can get.  I am the law of the jungle (eat or be eaten; kill or be killed), projected by mankind into institutional forms.

I am the lowest common denominator of the ability, intelligence and necessities of mankind.