Early in social life I discovered that values could be determined by the force of human desire and that desire itself was determined by Scarcity.  Value and Scarcity are therefore the cornerstones of my system.  I dressed them up so that men would not recognize them and baptized them Supply and Demand.

After this original discovery, I, The Price System, found it necessary to have more tools to work with.  So I invented a promise and called it I Promise to Pay.  This has turned out to be a neat device.  I Promise to Pay can be neither seen, tasted, heard, felt nor measured.  I conjured it out of nothing and planted it in the minds of men.  It took root and grew there with lush abundance.  I Promise to Pay was the first of a long list of operating devices I invented to facilitate the functioning of my system.  They were all conjured out of nothing, with no basis in physical laws, yet they have become the Rules of the Game under which my System operates.  Next, so that men would not recognize the non-substantial nature of my Promise, I fashioned real tokens to represent it.

These I called Money.  Since Money is the token of a promise, it is a Debt Token.  It has no ultimate reality in itself but only in what it represents, which has no reality at all.  Money is the promise of I Promise to Pay, when, as and if.

It is the Nothing you get for Something before you can get Anything.

It seemed necessary to camouflage the real nature of Money, so I gave it another name called Medium of Exchange.  This has a respectable sound and besides that it is actually how Money functions.  Medium of Exchange is not, however, a medium of distribution as some of my apologists’ assert.  My system, The Price System, is not interested in distribution.  It functions solely to exchange goods and services on the basis of scarcity determined values for a profit, and any distribution that results is an unavoidable by-product. 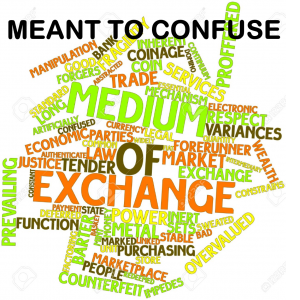 It became apparent at once that Money functioning as Medium of Exchange possessed certain characteristics useful to my system.  It is negotiable, transferable, interest-bearing and can be saved.  All this allows it to be traded in, stolen, given or gambled away; and since it is not a measure of anything real and fixed, it can be devalued, revalued and manipulated in countless ways.  This variability is necessary to the existence of my system.  In a Price System there must always be a free flow of Medium of Exchange, else the arteries of commerce will dry up.

In addition, there must also always be an ever present scarcity, else values will collapse and there will be no basis for exchange.