Globalization – A Study of the Pros and Cons

Globalization – A Study of the Pros and Cons

To be responsive and responsible in this time requires us to lead with a sense of urgency and to actively shape a world that is likely to present new threats but also many new opportunities. 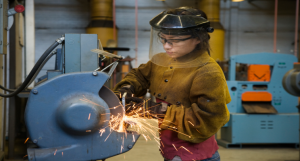 Not a day goes by now without a discussion taking place on the pros and cons of globalization – and lately most of the conversation has centered on the negatives. This has been especially pronounced in the aftermath of the US election and Brexit. And with populist movements on the rise elsewhere too, globalization has been given a bad name in many corners of the world. It is blamed for job losses, disaffected citizens, election outcomes and social alienation.

But is global economic connectivity really responsible for the demise of the middle classes and the rise of income inequality? Or is it much more a question of how we distribute the economic benefits? I believe it is the latter and that this is not just a question about the past. This issue will be even more important as we begin to navigate the imminent changes that the Fourth Industrial Revolution and associated megatrends bring for the future.

2016 has taught us to expect the unexpected. It has also left many people longing for a more rational public debate, based more on fact and less on rhetoric. Adding to this global conversation should always start with examining the data and looking critically at what history and global comparisons tell us. Context is everything – and because the world moves so quickly now – it can be easy to lose sight of this bigger picture.

Modern global, multilateral trade liberalization can be dated back to 1947 when the United States and 22 other nations signed the General Agreement on Tariffs and Trade (GATT). This trade treaty, as a complement to the 1944 Bretton Woods financial system agreement, would go on to establish the post war order and promote international prosperity, peace and security. In the ensuing years, real global exports of goods and services increased by a factor of 24, almost triple the pace of real world output growth, from 1960-2013 (White House, 2015). 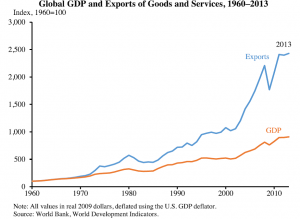 Almost always, economic and social developments implement irreversible structural adjustments to the world. Here are the most prominent ones that come to mind.

It is this third revolution that we are most familiar with as it has ushered a dramatic restructuring of the world economy during our lifetimes while also introducing a range of modern economic and social developments. Major changes in this period included (UNIDO, 2009):

As the primary example for this article, I will look at the US economy, the largest and richest in the world. Over the last 25 years, the US economy has grown 83% (adjusted for inflation), but family incomes on average have not changed at all during this same period (Tankersley, 2014). This trend is mirrored across a range of other advanced economies (Bird, 2015), although as we will see it is not the same everywhere.

In the wake of the Third Industrial Revolution, the US manufacturing industry provides an illuminating case study of the changes unleashed. The US civilian labor force grew from 62 million workers in 1950 to 160 million in 2015 (FRB, 2016). But while manufacturing accounted for over 30% of the jobs in the 1950’s, today it accounts for less than 10% (Lee & Mather, 2008). During this same period, the UK witnessed a similar decline in manufacturing (Sentence, 2015). Is this due to globalization?

While it is a fact that manufacturing jobs were off-shored, there are other influences at play. Despite offshoring, US manufacturing output continued to climb until around 2000, and has remained relatively steady since, in spite of the two most recent financial downturns of 2001 and 2008.

The Center for Economic Policy and Research highlights that “it is wrong to blame trade for the majority of [these job] losses” (Dobbs, Mischke & Roxburgh, 2012). Rather, productivity growth and the shift to services are the main contributors. The Heritage Foundation states: “Contrary to popular belief, these jobs have not moved overseas. They have been automated” (Sherk, n.d.).

In fact since 2010, nearly one million factory positions have been created and/or returned onshore in the US, with wages increasing some 10% (Rothfeder, 2010). The graphs below (Sherk, n.d.) suggest two key points: 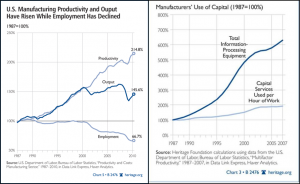 The investments in technology also coincide with changes in the educational profile of the US manufacturing workforce. As depicted below (Sherk, n.d.), lower educated workers have fared much worse suggesting that as the demands in manufacturing have become more sophisticated, the accompanying workforce needs to be more sophisticated, too. It’s no surprise then that the only people who have experienced a rise in manufacturing jobs in nearly the last 25 years are those who hold university degrees. 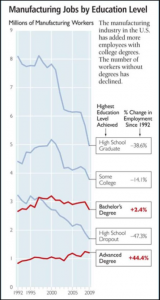 The question to ask is: who has benefited from the expansion of global trade and GDP growth?

The US paints a stark picture of inequality. The share of national income going to the richest one percent of Americans has doubled since 1980, from 10% to 20%. The share going to the top 0.01% – some 16,000 families with an average annual income of $24m – has quadrupled, from just over 1% to almost 5% (The Economist, 2012). When accounting for taxes and transfers, the US has the second-highest level of income inequality, after Chile, among 31 OECD countries (Desilver, 2014). Wealth inequality is even greater and presents quite a shocking picture: a fifth of US families earn 59.1% of all income and the richest twenty per cent hold 88.9% of all wealth.

Another article on Income Inequality

Widening income gaps have also been gaining traction, though to lesser degree, across other economies including Britain, Canada and India. More broadly over the last 30 years, income inequality has risen in about three quarters of all OECD countries. Significant socio-economic differences remain between the US and other countries.

Here are some examples: 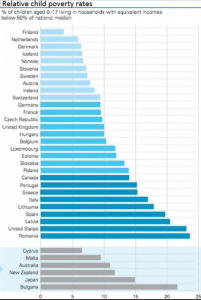 The examples above demonstrate that societies make choices about how they distribute wealth. Blaming globalization for inequality is not only inaccurate, it also avoids responsibility for a prevailing culture that encourages the centralization of wealth. Yes, global trade has contributed to offshoring to meet evolving demands in manufacturing – but the real problem is that in many countries the resulting wealth has not been distributed to benefit larger society. Mark Carney, the Governor of the Bank of England, said as much in a recent speech: “Among economists, a belief in free trade is totemic. But, while trade makes countries better off, it does not raise all boats… the benefits from trade are unequally spread across individuals and time.”

We are on the verge of witnessing far greater changes in the domestic labor market than global trade has ever unleashed. Technology will impact not just manufacturing but the service sector which represents nearly 80% of major economies like the US and UK. It is likely to have a wide-scale impact on a near majority of people in advanced economies as many jobs become automated, including those in highly skilled labor.

Responsive and responsible – how?

As the consequences of globalization and new technologies become clearer, people are looking for a different kind of leadership from business and governments. We need leadership that is “responsive and responsible” as suggested by the World Economic Forum’s 2017 agenda. But we need to work out what this actually means.

I believe that we need to start by recognizing inequality not as an inevitable result of globalization but as an outcome of the lack of balanced distribution of the benefits. Some societies have chosen to share their wealth and prioritize the collective well-being of their citizens over individual gain. This is based on the concept that placing value on greater equality ensures higher levels of social cohesion and a functioning society. They have also realized that broadening the base of wealth in a society leads to better economic outcomes in the longer term.

It’s instructive in this context to look at Germany and some of the Nordic countries. Here governments, businesses, unions and citizens have already initiated a public discourse and are exploring strategies to address many of the changes that are underway. They are focused on debating a new social compact and new policies on retraining and education, technology access, housing, health care and other social welfare systems. Importantly, they are discussing how to protect the individual by separating the concepts of labor and income, for example via potential Universal Basic Income (UBI) schemes.

We are at a critical point where we face significant transformative changes to our economies, social fabric and wider societies – much of which has yet to be imagined. Governments, business and citizens need to be prepared for this period. That means, at the very minimum, having the right balance of information, transparency, education, skills and safety nets to navigate this new environment.

To be responsive and responsible in this time requires us to lead with a sense of urgency and to actively shape a world that is likely to present new threats but also many new opportunities.