Do we NEED to colonize Mars? What is a Catabolic Collapse?

Home/All Articles/Do we NEED to colonize Mars? What is a Catabolic Collapse?
Previous Next

Do we NEED to colonize Mars? What is a Catabolic Collapse?

To many people, space travel and colonization of another planet is exciting, a new adventure; though, many see it as the only way for humans to survive as we are using the natural resources the earth has at a faster rate than they can replenish.

Must we go to Mars to survive or can we have a thriving population on earth in the future?

What is a catabolic collapse and is such a collapse inevitable?

Civilizations come and go; that we know from our history classes.  What causes these collapses and are they inevitable?

First: A definition – a self-reinforcing cycle of contraction, a temporary, less complex stability, further contraction etc. by converting too much capital (resources) to waste.  In simpler words, living non-sustainably.

Terminology:  Resources (R), naturally occurring, metals, oil, etc., Capital (C), resources that have been incorporated into use, but are still usable (iron ore into money), Waste (W), resources that have been fully used and incapable of further use, pollutants, tools, people, and Production (P), process of converting Resources into Capital, and then Capital into further Capital.

Stasis – that elusive state of equilibrium; is what all systems attempt to create, and impossible in a system that relies on ever expanding consumption and debt to continue.

One of the simplest and most known system is that of coyote, rabbits, and forest/meadow.  Too many rabbits allow the coyotes to increase, too few rabbits and coyotes decrease, too many rabbits and the meadow becomes unhealthy resulting in fewer rabbits and a return to a healthy meadow (if the rabbits have not decimated the meadow / forest with pollutants or removed the possibility of regeneration – oh yeah, that is a human, not animal action….) but, as you see with the chart below, each collapse and return to temporary stability are on a declining scale. 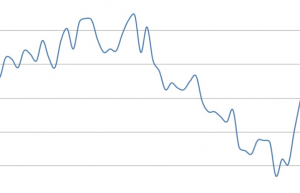 Catabolism is a response to a crisis – The pregnant coyote eats as many rabbits as she can so her pups can survive, but in doing so, actually depletes her resources to the collapsing point.  In the 1900s, the rabbit /coyote / environment scene the animals could move to a different part of the forest / meadow and start over, but consider that they only have the one forest / meadow to live in.  Or, we could visualize the well-known Peak Oil problem.

To try to keep up the stasis – or appearance thereof – resources or non-renewable resources must be used at an increasing rate due to the increase in the systems inhabitants; more resources must be spent on protection of the system, and gradually, the system is spending so quickly that its collapse appears sudden.  This is called an anabolic cycle.

But is a collapse inevitable, or are there indicators that we could pay attention to that might forestall, or even prevent a collapse? YES.

How can we forestall or prevent a collapse?

Live in a sustainable manner, not use more than you need (not want; remember the pregnant coyote….)  Creating less waste or utilizing waste as a further capital.  The Omni processor (Omniprocessor article) takes human waste and turns it directly into safe drinking water and fertilizer.

Take sustainability to a governmental decision making level.  Thinking of each action we do individually, or collectively as what it will do to the future, not just the immediate future as is typically the case with our government now, but out seven generations as the Native Americans did. (Science supports 7-generations future decision making )  What a different world we will live in if Sustainable actions, sustainable living isn’t just for hippies and ‘weirdos’ any longer, but a common practice as we all concern ourselves with what our legacy to the world will be.

I want our legacy to be one of peace and plenty.

It appears, if we choose the right actions, and make well thought out choices, individually and collectively, then we can have a future without Needing to move to Mars.  We will have the technology to move out there and let those adventurous souls have their fun, but it won’t be the only and desperate option.

I have loosely summarized two articles regarding a Catabolic Collapse with links to original articles below.

Original Articles
How Civilizations Fall
The Onset of Catabolic Collapse