CRISIS OF THE AGES

CRISIS OF THE AGES

THE CRISIS OF THE AGES
By Steve Doll

Regardless of philosophy or social position, we and all other life forms on Earth are physical beings, dependent on the physical resources of our planet for our continued existence. To all intents and purposes, we live in a closed, finite system, subject to physical laws and limitations. 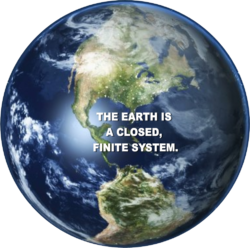 Life on earth, and all activity in the universe for that matter, is a system of constant exchange of energy into other forms. The physical law of entropy demands that some of this energy is dissipated into less useful forms at each exchange.

The control of the development and distribution of the products of this finite planet, however, is carried out by means of a creation solely of the human mind, that of monetary valuation. It is through this system of valuation that we seek to control the exchange of the physical production of the planet. Unlike the planet, this system, being the product of human imagination as a convenient way of governing this control, knows no bounds and can in theory expand as long as the planet can sustain it. 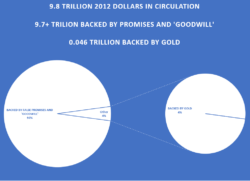 And there is the crux. The entire world, and its constantly expanding human population – which technology has enabled to consume ever more of the physical resources – uses this imaginary system, which can expand and be hoarded by individuals according to the whims and desires of humans, to evaluate the physical properties with which it has no physical relationship. It is born of the archaic notion of “sweat of the brow” labor, in which each does his/her part and is assigned a portion of the production according to their perceived value to the society.

In a system in which money is considered to be the primary mover of human activity, this imaginary money is elevated to the status of having value in and of itself.
For this reason, and because it can be hoarded, individuals who can manipulate it and enable its flow are seen to be deserving of it, whether they produce something tangible or not. Indeed, those who reap most of the benefits of this system are those who neither weave nor spin, but simply manage the flow of money.
To state it simply, money and debt can be created infinitely, as long as there are humans who believe in it. It is, in fact, the most entrenched belief system in the world. 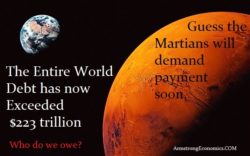 In spite of all the marvels of technology, however, the finite physical properties of our planet cannot be expanded, but must go the other way, toward an increasingly unusable state. It is therefore imperative that, for the preservation of human society and a habitable planet, humankind must begin to think of society and the planet in scientific, analytical fashion and adopt an economic system that develops and distributes the products of the Earth in its own terms, not simply subjective interpretations of who “deserves” what. This can be done in an equitable and sustainable manner.

To do otherwise – to attempt to maintain a system of imaginary debt – invites increasing social dissolution and environmental decay. 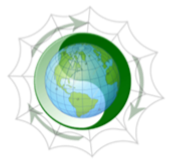 Technocracy is the only organization in the world that is advancing this shift away from the monetary system and has outlined a design for a responsible management of the physical capacities of the planet.