Imagine we did accounting in terms of power, not money or things.  Things and money are merely a means to an end.  Our ability to provide everything we need is already here, it’s a matter of harnessing the power and applying it for our benefit.  Those that run our society at present, such as politicians and capitalists, no longer think in terms of money and things as their ultimate goal.

Capitalists’ direct resources and allow or suppress innovation to control the market, 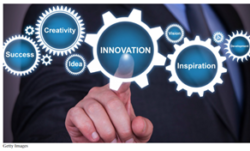 raise or lower prices and struggle to maintain a supremacy over other dominating sections of capital.  Capital is power.  A capitalist’s power is measured by its difference against others with power.

Of course, the competition between sections of dominant capital is merely wasteful conflict.  The technology that maintains that chaos can easily be re-employed to regain control over our economy, environment, and society.  This is the evolution of the idea already known by Technocracy with the concept of “energy credits”.  We direct the power of a society toward a harmonious goal.

Price, salaries, and profit once were connected.  Those three are, however, disconnected today.  Profits rise as more are driven into poverty.  The worker today is more productive than ever and yet wages decline, and those wages are able to purchase less and less.

A system created long ago, when scarcity was the rule, no longer applies.  Thanks to technology, the power brokers of today have the ability to destroy economies in an instant.  Reckless environmental destruction, wasteful excess, and disasters to the well-being of families around the world are nothing to the operations of these few who wield control.  Nothing matters but chasing the end game of a power struggle that is, in fact, never ending.

To me the most appealing aspect of Technocracy is the plain and simple fact that, even in the teeth of a disaster, we are looking not just for what is wrong but also what are the possibilities of creating something better.  Once we change our perspective, a world of possibilities is open to us.

The possibilities of a system so complex and global is nothing to be depressed about.  The markets today, and those that operate the market at a global level, have the technology and a system of control that can, if we change the focus, redirect power on a global level to answer the needs of everyone.  No matter how complex the production process, no matter how widespread or specific the need, the technology exists to organize production and distribution.

The same skills are needed for both sabotaging an economy as developing it.  The technology we have at our fingertips literally connects us all together, all industries, all peoples, all needs and fulfillment.  We have the means to control our destiny, there is nothing needed but a new way of looking at the way we use the power we have.