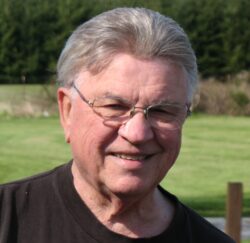 I would like to give a little insight as to what being a member of Technocracy Inc. for 56 years meant for me.

I was 28 when first introduced to the design.  I worked with an older member with whom I could talk about Technocracy.  I received a variety of printed material from him and he answered my many questions.

I do not know if I am unique in this regard, but it did not take me long to see the true benefits that a functional social and economic system that Technocracy Inc. espoused could bring us.  Then I began to think, “how come I have never seen nor heard about this information before?”   I soon came to that reason when I tried to interest other people in Technocracy.  It was a two-part answer.

During those early months as a member of Technocracy one incident stands out.  I had in my possession one of the booklets that the editors and writers on the subject created.  It was titled “America Must Show the Way.”  I had a neighborhood friend who was, by heritage, a native American.  I thought he would be greatly interested in knowing how his ancestors and even to this day, people of color were treated so unfairly – to put it mildly.  I gave him the booklet and he said he would read it.  A few days later, he came over to my house and threw the booklet on the table exclaiming it to be nothing but “Communism” drivel.

You see, we were subjected to the impact of the “cold-war” at that time, and the McCarthy anti Communist hearings seemed to diminish rational reasoning for so many people.  Much as what is happening today.

The other reason was in the presentation given by Howard Scott who was the Director-In-Chief and headed the organization from the 1930s to the 1970s. Mr. Scott gave a national radio presentation explaining what was the essence of the design promoted by the organization.  He highlighted that we would no longer have need for politics, all the waste and corruption that is part and parcel of the system that uses money and debt creation (What we call the Price System).

That information was far too much for the powers controlling the existing system.  Remember, we were in the middle of a great depression and there were concerning factions vying for people’s attention, communism, fascism, socialism, and others. To see how Technocracy Inc. compares / contrasts with the above Isms see  Technocracy and Isms

But the membership in Technocracy was growing and at the time it became the fastest growing organization the world had ever known.  This so unnerved those controlling powers that it was decided that something must be done to diminish the influence that was promoting a functional social and economic system directed by science.  A real effort was committed to undermine the organization including putting Technocracy Inc. on a watch list for the federal government.  See Hubert Investigated

At that time, the media had only two prime outlets, radio, and newspapers.  One individual who exerted tremendous control over what was presented to the public was William Randolph Hearst.  Mr. Hearst, who owned several major newspapers with interest in radio, became quite wealthy.  He owned what is known as the Hearst Castle in San Luis Obispo, CA.  Of course, he alone could not attain completely subduing Technocracy’s message, but he instructed all of his various news outlets to “never write, photograph or comment anything about Technocracy,” that order was followed as did most of the smaller outlets.

Howard Scott then directed each section across the U S. and Canada, if possible, to publish magazines, booklets, and articles on contemporary topics something called “briefs.”  In our warehouse in Tennessee, we have thousands of those documents.  We are still active although most activity now comes through our web site on the Internet.  Which brings me to something that is very troubling.

We now are experiencing a very dysfunctional political atmosphere here in the U.S. to say the least.  It would seem in a rational world, support for science and factual information would be ‘a no brainer’ as people say.  But it appears to be the opposite, whomever has the loudest, rudest, most emotional voice seems to be the leader in spreading (mis)information to the public.  It is as surprising as it is frightening.

The question now before us; can a society so irrational that they would rather follow emotion rather than facts, be mature enough to understand the concept of a functionally operating society that values all people equally, such as the idea put before us by Technocracy Inc?

I guess time will tell.  The challenge we all share, those of you that have gone far enough to read this, is to try to get others to know about this educational endeavor.  Our present mode of system operation (the Price System) is unsustainable.  There are only two options – begin to rebuild our societies into something that is sustainable or go the way of total chaos.

My best to you all,