“In physical science… the first step is to define clearly the material system which we make the subject of our statements. This system may be of any degree of complexity. It may be a simple material particle, a body of finite size, or any number of such bodies, and it may even be extended so as to include the whole material universe.” — James Clerk Maxwell, Matter and Motion.

The “whole material universe” is composed of matter that can only exist using energy.

1. The strength and vitality required for sustained physical or mental activity.  In other words, energy is the capacity to do work.

Note: “Energy” as related to human mobility and mental activity is derived from the combining of either fat or glucose with oxygen, producing energy and releasing carbon dioxide in a chemical reaction.

2. Work is force multiplied by the distance an object is moved.
3. At it most basic state the universe is composed of matter and energy.
4. Without energy there would be no motion, no light and no life.

There are two aspects of Energy that we will address

Technocracy as it applies to the Energy Crises

What is the problem?

In a profit driven economy, the main objective is to use the energy sources developed years ago with the crude technology of the past in order for large powerful corporations to profit.  Any effort to develop less harmful energy sources that have become available, will be put down by the entrenched profit enterprises.

Technocracy stated that we should strive for Dynamic equilibrium.  This requires a balance between the human population and the physical environment of the area.  Society should concentrate on gradually cutting back on the more harmful, less renewable energy sources while at the same time increasing the use of the safer renewable resources.  This would enable the economy and our way of life to continue on uninterrupted while on a steady course to improving our environment and ensuring long term energy stability and independence.  It should be mandatory that we use the energy sources that do the least damage to us and the environment.

According to Donald Elliott (a professor of law at Yale Law School), many countries in Europe get over one-third and some over one-half of their electricity from renewable sources such as wind and solar.  Europeans across the political spectrum support government policies to promote renewal energy, but government support for renewable energy is extremely controversial in the United States.

What’s preventing us from making these seemingly obvious choices? Could it be corruption and greed?

Energy as it pertains to the Technocracy Energy distribution Plan

Note: The reason Technocracy proposed that energy should be the measure of social activity is that the energy required to produce anything is fundamental.  Without the embedded energy required to bring it into existence or move it around it would not exist.

The Price System grew out of the days of scarcity, when trading his crude materials or stealing them, was the only way in which man could acquire the articles which he required. The trading system has grown until it is now the overwhelming structure of finance, business commerce, and politics.  No intention or pretense is made of accurate measurement or control; no physical accounting is involved; no accurate predictions can be made; and no stabilization can be assured. The Price System is simply a method of erratic exchange. In scarcity it sufficed well enough as an exchange method; in abundance it cannot even do that.

After World War 1, the disrupted conditions at that time led to a scientific investigation which in turn proved that the only common denominator of all goods and services was energy.

The scientists who pointed this out simply proposed to measure the total amount of energy used by the North American Continent in a given period; measure the energy cost of physical production and services; and use these measurements as the basis for regulation of all Continental production and distribution. 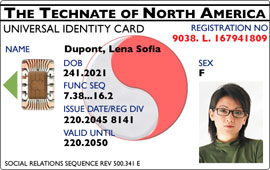 Technocracy has the solutions:

Technocracy has developed an Energy Distribution plan based on this proposal.  Why not money, you may ask.  On the basis of these requirements, it is interesting to consider money as a possible medium of distribution. But before doing this, let us bear in mind what the properties of money are. In the first place, money relationships are all based upon ‘value,’ which in turn is a function of scarcity. Hence money is not a ‘measure’ of anything. Secondly, money is a debt claim against society and is valid in the hands of any bearer. In other words, it is negotiable; it can be traded, stolen, given or gambled away. Thirdly, money can be saved. Fourthly, money circulates, and is not destroyed or canceled out upon being spent. On each of these counts money fails to meet our requirements as our medium of distribution.

Articles you may want to read……..