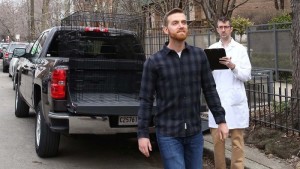 A member of the endangered subtype of human,
ones who possesses the unusual abilities to calmly reflect on situations and view the world from others’ perspectives,
is reintroduced into the general population.

ITHACA, NY—In an ambitious attempt to revive a population long considered to be on the brink of extinction, scientists announced Friday they have slowly begun to reintroduce
normal, well-adjusted human beings back into society.

According to officials at Cornell University, where for the past 18-years conservation researchers have operated an enclosed sanctuary for humans who are levelheaded and make it a habit to think before they speak, the endangered group is being cautiously reintegrated into select locations nationwide in hopes that they can reestablish permanent communities and one day thrive again.

“We’ve worked for years to stabilize our society’s dwindling population of sane, generally reasonable people, and within the safe confines of our refuge we’ve finally seen their numbers start to bounce back a little,” said Josh Adelson, head of the Cornell research team, which moved the remaining members of the group into a protected habitat in 1998 to keep them from dying off completely. “Now, we can very gradually begin to release this rare breed of rational humans back into the general public. With luck, they can survive and prosper.”

“Even if this small group of humans able to deal with their negative emotions in a nondestructive manner manages to flourish, there’s still no telling whether the next generation will be able to survive.”

“Our hope is that within a century or so, the traits for making sound long-term decisions and being able to tolerate people different from oneself will propagate and begin to reemerge within the species at large,” he continued.

Prior to the conservation efforts, it is believed that even-tempered people with sound judgment and the ability to put the needs of others before themselves had dwindled to less than 150 within the country’s borders, and had gone completely extinct in the nation’s businesses and civic institutions. Experts widely agree that without isolation, protection, and captive-breeding programs, the remaining thoughtful, foresighted individuals would have been totally wiped out.

While admitting that the project’s reintroduction phase would be complex and its success far from assured, Adelson stressed that such measures were nevertheless absolutely necessary if responsible and emotionally mature humans able to see beyond the immediate gratification of their basest desires were ever to reestablish a foothold in society.

“Obviously, we have taken great precautions before releasing these individuals into an environment where demonstrations of good sense, open-mindedness, and basic human empathy are perceived as signs of weakness and quickly preyed upon,” said Adelson, who noted that to ease the transition during their first month acclimating to society, the endangered population would be kept away from television, the internet, advertisements, and all other forms of media. “For example, we’ve trained them for the inevitable encounters they will face with large groups of people incapable of separating emotions from arguments.”

“It hasn’t been easy,” Adelson continued. “Last month, members of our trial group were confronted by several aggressive and predatory individuals, and another was nearly torn apart by angry hordes on social media within just 48 hours of being reintroduced into a metropolitan area, forcing us to bring them back to our refuge immediately.”

Though researchers have expressed cautious optimism for the reintroduction program, many leading scientists have noted that the number of areas in the U.S. capable of sustaining well-adjusted humans has drastically decreased. According to experts, there is almost no chance the population will ever thrive again anywhere in the state of Florida.

“Even if this small group of humans able to deal with their negative emotions in a nondestructive manner manages to flourish, there’s still no telling whether the next generation will be able to survive,” Adelson said. “There are a lot of unknown variables, and we realize we’re taking a big risk here. But this program is our last, best hope of ensuring that people who are willing to go out of their way to help someone who can’t immediately offer them anything in return remain a part of our world.”